Today was my first day joining everyone else for EnHackathon, aiming to contribute to a couple of issues in the subinterpreter project.

My last large attempt at contributing to CPython was an experiment with “unboxing” integers (i.e. encoding them into PyObject * pointer values rather than actually allocating objects). Unfortunately it turned out that this effectively reduced performance across the board by about 10%!1

It was good to have a compelling reason to look at some (different aspects) of the CPython internals again – the subinterpreter project has the potential to address some of the major missed use-cases for CPython, so it’s great to get involved.

1: It turns out that extra adding branches to the most frequently-used C APIs (e.g. INCREF and DECREF), regardless of which way the branch is predicted, is not great for performance!

I started by looking at the issue about disallowing fork in subinterpreters. After catching up on discussion on github and bpo the situation seemed to be:

Where did this leave everything? Well, everyone on the bpo tracker seemed happy that the issue was fixed, but Eric’s latest comment on the github issue suggested that there might be more to do.

So the first thing to do was figure out what the latest state really was.

Digging into the code to look at the various bits of runtime or interpreter state, it’s easy to get lost in a maze of interrelated objects and accessor functions.

To help us navigate this, I summarised the key bits visually as a point of reference: 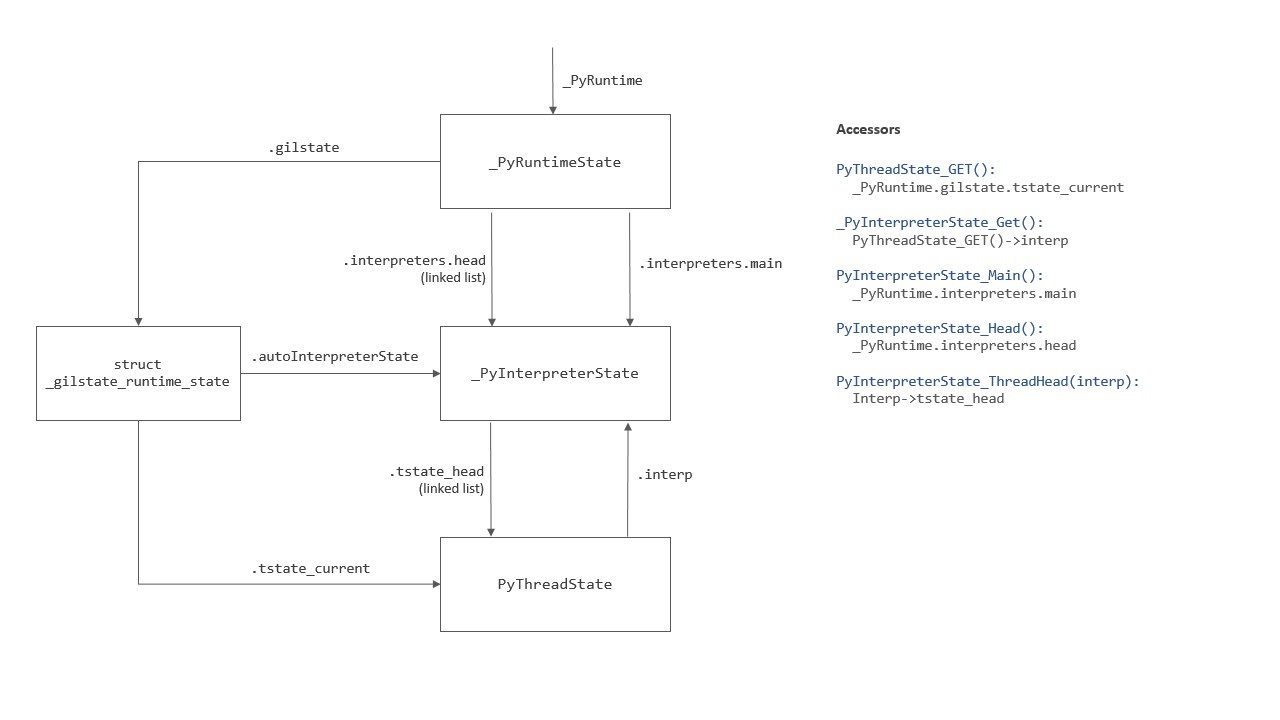 Back to the fork-ing issues: were there actually any problems remaining?

It turned out the answer to this was “no”, but it took me longer than I’d have hoped to come to this conclusion!

My conclusion on all of this was that there’s no further code change needed, just a small docs update to note the change in os.fork() behaviour.

One of the major changes needed for the overall subinterpreter project is moving state from the global runtime, to a per-interpreter granularity.

There’s another issue tracking one part of this: moving “pending” calls from the global runtime to be per-interpreter.

Running out of time towards the end of the day I started looking at the history of the issue, seeing a now-familiar pattern: Eric had pushed some sensible-looking changes to implement this, only to find that it broke a handful of tests in an unpredictable way on a small handful of platforms!

I didn’t have any time to look any deeper than this, but the outline of the problem looked interesting, essentially:

So no actual progress beyond digesting some history…but this could be an interesting problem to try and dig into in future!